We arrived in Siem Reap having taken a private taxi from Pursat (the only bus left at 7.30 am, and I misheard the price of the taxi which made it a much more expensive journey than intended. It was easy though, and after the day before, we needed easy very badly.) Our hostel – One Stop Hostel – was great & I’d strongly recommend to anyone going to Siem Reap, so we settled in and then went out for a walk around town, the centre of which was on our doorstep. The town itself is a very tourist-focussed town and felt absolutely nothing like the rest of Cambodia that we had experienced – it was even sunny! They get visitors from all over SE Asia, even if they aren’t spending any other time in Cambodia, heading to the world wonder that is Angkor Wat.

That first afternoon we checked out a couple of bars and laid our plans for the following few days. One of the bars even featured a skate park on the roof, which was a first for me! Following dinner we went looking for a beer on pub street, the main nightlife hub, and found that there was a restriction on selling alcohol as it was the night before the election which was troubling! Fortunately we found a western owned pub that was happy to sell beer as long as we sat inside (spirits can be disguised as soft drinks you see…).

The next day it was Angkor Wat time. Angkor Wat itself is the name of an individual temple, but there is an entire park full of 14 temples that were all built over the course of a few centuries as emperor after emperor tried to outdo their predecessor, which is what makes the area so famous.

First stop was the museum which was the perfect way to set ourselves up with at least some idea of what was going on, what we were looking at and why on earth these things were all here. The museum was one of the better ones in SE Asia, being informative, large and pretty clearly communicating information about the exhibits – some of which were very interesting. It is quite big though, and Claire hilariously managed to piss off a load of people by much like a kid pressing the doorbell & running off, failing to press the correct language on one of the videos, then walking off while it played in something nobody could understand! With a little brain fatigue but full of knowledge we headed back to town for some lunch.

Stomachs & brains refreshed, it was now temple time so off we went to the furthest away temple, Banteay Srei. This one is famous for the pink colour of the limestone it is built in and the level of ornateness of the carvings. We booked a tour from the hostel (which offered tours at prices comparable with everyone else) which involved a return trip to the temple in a tuk-tuk via the ticket office and the landmine museum.

The ticket office is odd. They moved it a few years ago from the main road into the park, to a random field on the way out of town, down a typically horrific Cambodian road. You then need to buy a 1, 3 or 7 day pass with discounts for the more days you buy. 3 had been recommended to us, and fit nicely with our plans so we went ahead with that from one of the 40-ish counters there to serve all 3 customers in the place. To be fair, I think it gets really busy in the mornings, so be warned if you’re ever planning to visit! Tickets can be bought the night before, after 5.30pm, which would allow for a more efficient day if you so desired. They also take a photo of you & print it on the ticket, so don’t think you can get away with passing tickets between people.

Next stop, after a fair bit of chugging along in the tuk-tuk, was the landmine museum. This was fascinating and well worth both a visit and the ticket price. Essentially, a guy who used to be a child soldier in the Khmer Rouge & was used to lay landmines but later (when he was old enough to understand what was going on) defected to the other side has spent most of his adult life going around the country defusing the landmines he helped to lay. At first he did – with no training by the way – the ones he personally laid & could remember the location of and in the years since has developed into the fully trained head of a small NGO that is dedicated to removing landmines & UXO from Cambodia. It also supports children affected by these by putting them school among other things & is generally just doing good in the world. 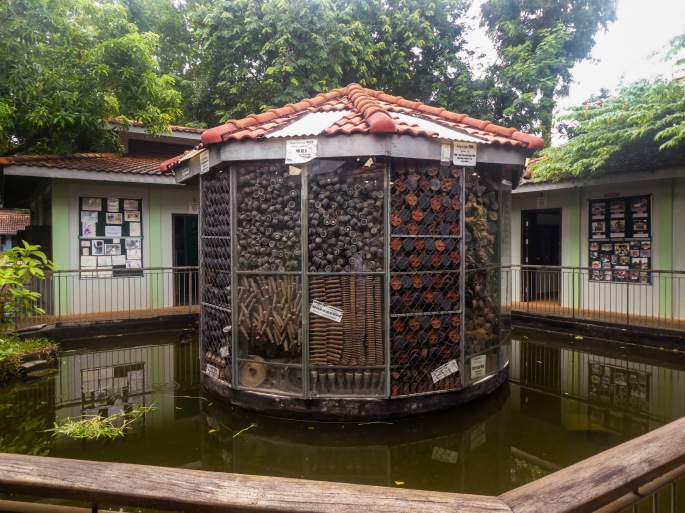 I could go on about the place but won’t, it was a great thing to visit, really well set up & every single item in the place was something that he personally has defused. Unsurprisingly he has won a load of awards over the years!

Now it was time for the temple. We didn’t really know what to expect, but found exactly what had been described to us – a very ornate, beautifully coloured old temple that was still in relatively decent condition & kept us busy for an hour or two as we looked around it and took the first batch of what would soon become a ridiculous number of photos of temples. It is a bit out of the way, but was worth it I’d say, in hindsight it is relatively different from the others and was a good starting point for us on day 1.

The following day, we were on another tuk-tuk tour, this time to see the main temple of Angkor Wat itself, as well as a few of the other main ones on the “small tour”. This required a very early start, as one of the things to do is go to watch sunrise over Angkor Wat and sadly sunrise was at about 6am. Even more sadly, there basically wasn’t a sunrise, with plenty of cloud around which made our newly purchased mini-tripod (a saga in itself, apparently Cambodia doesn’t do tripods) & set up of our first time lapse pretty much redundant. Still, it was nice to look at and the temple itself was pretty cool. Much bigger than the one the day before though, albeit less ornate.

Then we went to Bayon – both of our favourite temple – where we saw many faces and even a monkey getting into a can of Fanta that then exploded in it’s face! Claire has a great video which we will add to this post at some point.

Next stop was Ta Prohm, otherwise known as the Tomb Raider temple thanks to it’s featuring in the films. This was unique for the giant trees growing out of the walls, which was pretty cool!

By this point, we were tired, so visited another temple which was not as impressive as the others before heading back to bed for a much needed midday nap. That evening, we did some shopping in the market (including some US$1 T-shirts) before heading to the circus. The circus is not the bad kind, but a Cirque du Soleil style performance from some Cambodians who had been pulled out of various forms of adversity and trained with some incredible skills. Another activity well worth a visit for anyone in Siem Reap, it was funny, entertaining, very impressive and a great way to spend an evening.

Our final day in the park we decided (I say we, Claire was less keen but didn’t put up too much resistance) to rent some bicycles and do the “Grand Tour” of the remaining temples. This was a great idea – cheaper than the tuk-tuk version & gave us more freedom & time to do as we pleased. That was until Claire went literally over her handlebars on the way into the park!

This was thanks to some extremely erratic cycling from some children and some outrageously sharp disc brakes. The first I knew of it was when I saw the passengers of a tuk-tuk going past me looking shocked, before tuning round to see her and her bike in a pile on the floor. Fortunately, the damage was minimal and after some patching up and a moment to regain some composure we were back on our way.

I have a habit of thinking things will be easier than they actually are and 40km, 8 temples, another fall (this time slowly and hilariously into a soft, wet muddy puddle after which a local women literally pointed and laughed as she drove past on her motorbike) and I imagine many unspoken swear words later, we rolled very tiredly back into town for a much needed shower and cold drink. How people were going to survive the marathon 1 week after we were there in the 35 deg c heat & 80% humidity I have no idea!

The final day was less interesting than the previous, but I think still worth doing as there is a lot of variety in the different temples, especially the water temple which was a highlight of the day.

In the interests of not making this post any longer than it already is, I’ll leave it there with a load of photos below. The following day we were heading off to Bangkok for a few days as our time in Cambodia came to an end. Angkor Wat was well worth the visit and was a very interesting place, but Siem Reap really isn’t a reflection of Cambodia as a whole!

View all posts by andrewlaniece