Having spent lots of time in cities and with limited time before we had to leave Vietnam, we visited Hanoi in bits and pieces. We found a fairly typical big Asian city which is busy but has plenty to keep a tourist amused for a few days.

Firstly, accommodation. We stayed in 3 different hostels in Hanoi. The first, Hanoi Centre Hostel, was good – nice atmosphere, great breakfast, comfy beds. The second, “The First Hostel”, was less good, smaller, cramped, silly layout of beds. The third, Little Charm Hostel was great and definitely the place to stay if you’re ever in Hanoi. It was brand new & even had a pool inside.

As a big city, there were a few obvious touristy things to do. The first was eating. This made me happy! Hanoi is known for food, and by now we were in no way afraid of dodgy looking street vendors so sampled a variety of foods. I have no idea what half of them were, but most were noodle based and very tasty. We spent an evening with an aussie couple who had been even more adventurous, and ended up trying chicken feet and other such delicacies. As a general rule, if you go somewhere that is full of locals and looks to only make one or two things then you’re onto a winner, just go along with what they say and it will be tasty. Also, banh mi everywhere is great!

After dinner, there is a place called bar street. Unsurprisingly, it is full of bars. The police walk along every so often pretending to care about the seating in the street. If the vendors are caught serving people there they have to pay a fine so have spotters at each end of the road warning everyone if someone is nearby. The vendors then sweep up the small plastic chairs and everyone stands there drinking in the road pretending they weren’t sat down. Then the policeman goes, the chairs come back and everyone carries on. It’s one of those silly things where everyone knows what is happening and keeps up the charade, but for no apparent reason.

Bar street is one of many streets in Hanoi that is known by what you buy from it. There is a trouser street, shoe street, jewellery street, pot street etc so shopping is easy as long as you know which street is the one you want. We spent some time on shoe street buying Claire some new shoes after the incident with the dog in Sapa, and it was simple enough. They stock factory seconds from all the big brands which are way cheaper than the real deal back home.

As well as bar street, there is a bar on the railway lines. We had a drink here (which was oddly expensive) and were presented with a certificate congratulating us on surviving! Everyone in Hanoi appears to make their own beer, which is silly cheap. The night we spent with the aussies we went to a local street bar and had 15 beers between us and 2 big bags of peanuts for about £5 total!

Moving on from beer, another drink well known in Hanoi is egg coffee. It’s essentially a cappuccino but swap the foam for whipped eggs not unlike an uncooked meringue. I was sceptical, but after numerous good reviews gave it a go and it was actually really good. The hot chocolate version Claire had was also excellent.

Beyond eating and drinking, there are some sights to see. We didn’t bother with anything out of walking distance as we had limited time, but still saw a good chunk. The cathedral was a nice looking cathedral which we stumbled on when looking for food, nothing more than that though. The main lake in the centre, Hoàn Kiếm Lake, was nice to stroll around too but won’t make or break a trip. 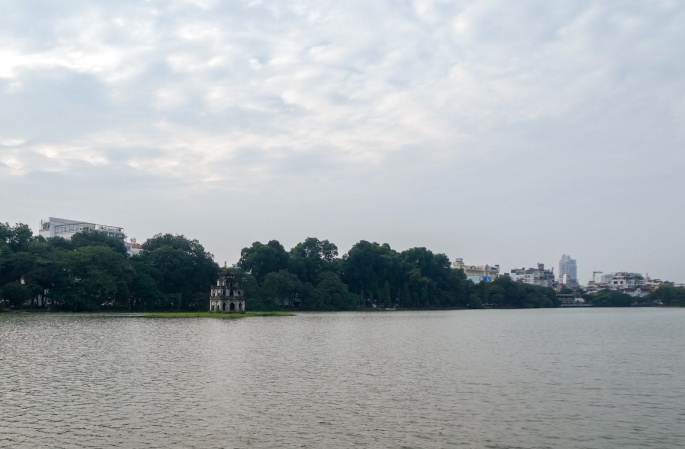 The two things we did that were pretty good were the water puppet show and the ‘Hanoi Hilton’. The water puppets are exactly as described – it’s a puppet show based in an indoor pool of water. It was really entertaining, funny and though we had no clue what the storyline was we were glad to have gone.

The Hanoi Hilton, or Hoa Lo Prison, to give it is real name was a POW camp during the Vietnam War and is where the late US Senator John McCain was held. It was a clear reminder that Vietnam remains a communist country and has to go down as one of the most one sided museums I’ve ever seen. It paints a picture of how the brutal French used the site to persecute the brave Vietnamese fighting against them before independence and then how the Americans were treated to a life of luxury during the war. A quick Google search proves this was far from accurate – the nickname is definitely ironic and not proof of how lovely the conditions were as the Museum suggests. Nonetheless, well worth a visit as long as you go with the correct mindset.

Other than that, we had haircuts which for Claire included a 45 minute head massage and found a cheap and simple route to the airport via the shuttle bus which was about 10 times cheaper than the taxis. It was an interesting city that served a purpose, but we’re fairly over big cities now so it wasn’t the highlight of our trip. Well worth a couple of days though and probably a good starting point for Vietnam – it’s better than Ho Chi Minh City for sure.

View all posts by andrewlaniece